I'm super excited to announce that my new book, Stoking the Fire (Salus Security Book 1) is now live across all Amazon sites and available in KU! 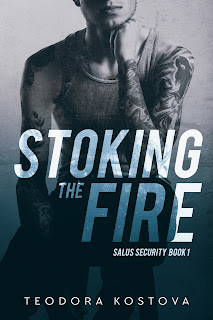 It's the first book in my brand new series - a sexy second chance, bodyguard romance with lots of feels and a bit of angst sprinkled for taste.

This is the book for you if you like:

🔥a cabin at the lake 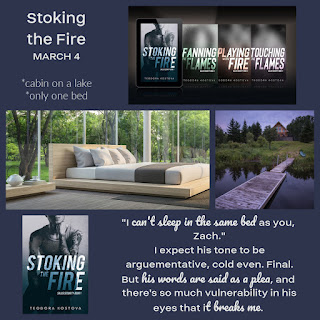 "You hired my ex as my bodyguard?"

When Alec left NYC - left me - I was a broken mess. All my days blurred into a continuous haze of alcohol, parties, and meaningless hook-ups.

Until my sister nearly died in a car accident. Her recovery was the wake-up call I needed.

Now, three years later, I've cleaned up my act, sobered up, and finally became the son my father always wished I was.

But being part of one of the most influential families in American has its disadvantages. Like fanatic supremacists trying to kill you.

My father's solution? Hire Alec Bonovich to protect me.

Doesn't matter that he's my ex.

Doesn't matter that just seeing him makes my pulse quicken.

Doesn't matter that he's the only man who's ever broken my heart.

Because Alec is the best.

And he’s the only one I trust to protect me when my life is in danger.

Posted by Teodora Kostova at 08:54

Hot Summer Nights was born as a project of love for summer stories! I personally think there aren't enough of them. There are plenty of Christmas stories, Valentine's Day, even Halloween, but not enough stories that you can relax with on the beach, in your cosy cottage in the mountains or anywhere else you'd decided to spend your summer holiday. 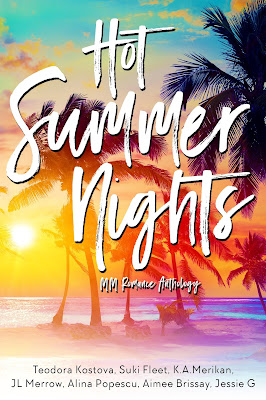 If you decide to buy the anthology - or read it in KU - you'll be supporting a wonderful charity. All proceeds from the anthology are going to The Trevor Project, an incredible charity dealing with suicide prevention in LGBT+ youth.
So far, for the few weeks the charity has been on sale, we've managed to raise over $800 for The Trevor Project, and I'm hoping we can make it to over $1000 by the end of the sale term.
The anthology will be on sale from June 20 to September 20, so don't miss your chance to grab a copy!

It was a real pleasure working with the authors of Hot Summer Nights! I know I'm biased because it's my own project, but I can safely say this anthology is one of the best I've ever read! Every story brings its own charm to the anthology, and no two are similar!

In school, Nico and King are best friends, and each other’s first love. But their lives take a different path and they lose touch.
Now, King is a famous musician and Nico is trying to make a name for himself as a journalist. When King’s life starts falling apart, fate brings them together on a private island, and reignites old feelings.
Can they make it work this time? Or are their worlds too far apart?

Alpaca My Bags by JL Merrow

Silver fox Scott Riley is holidaying on the Isle of Wight with his newborn granddaughter and her parents following the breakup of his relationship. A bit of fun in the sun with rugged alpaca farmer, Ryan, could be just what the doctor ordered. But when both men realise this holiday fling could be the start of something more, they’ll need to work hard to counter Scott’s family’s misgivings—not to mention their own.

Alpha Mine by Aimee Brissay

Away from home and its escalating conflicts, the last thing Andrei needs is to fall for the newest member of the pack. But he can’t help lusting after Sorin.
As the alpha, he can’t afford to be distracted, but neither he nor Sorin seem able to resist the burning attraction between them. Will this connection prove to be too much of a risk?

Everybody in the Place by Suki Fleet

Alfie Adams comes at life sideways.
After unexpectedly losing his job in television, and having the script he’s worked so hard on unceremoniously dropped, Alfie turns up at his oldest friend, Jam’s, birthday party drunk, pretty sure his world has ended, and that he’s about to hit rock bottom with a bone-cracking thud.
But it’s funny how Jam’s little brother, Benji, seems to know exactly what Alfie needs. For the past twelve months Alfie has thrown himself into his job and tried hard not to think about beautiful punk-loving Benji—tried not to see how the sweet kid he used to look out for, and who used to trail so adoringly after him, has grown up into a big lad with an even bigger heart. As Alfie sobers up, he begins to see things with a new perspective, and Benji has his full attention.
If only Alfie can admit what it is he wants.

Nate doesn’t fit in with his friends from church. He isn’t all that religious. He likes music his parents wouldn’t approve of. He’s gay. He’s determined to stay under the radar, but a chance meeting with a handsome biker who flirts Nate out of his modesty might throw those plans out of the window.

Heart of the Dragon by Alina Popescu

When a power-hungry king threatens to drown the world in blood, a bastard prince and a prisoner suspected of hiding mythical beasts find themselves in an unlikely alliance. Driven together by loneliness and undeniable attraction, they struggle to trust their choices and each other. Should they fail, neither will survive.

Not so Predictable by Jessie G

Oliver Tryst yearns for excitement, fun, and a reprieve from the endless winter blanketing Upstate New York. But when a cruise with his best pals turns into a solo trip to paradise, Oliver finds himself mustering with the winter fling he wished hadn’t gotten away. With his cautious heart thawing in the Caribbean sun, Oliver will have to decide if he can leave stability behind for a chance to turn his holiday hookup into a happily ever after.
Posted by Teodora Kostova at 04:53

My new book Grounded is LIVE on Amazon and available on KU! It's the sequel to Cookies, Shane and Greg's story, but can be read as a stand-alone novel. 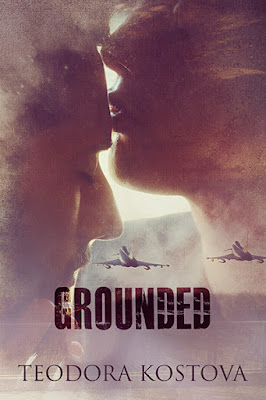 This book took so long to write mainly because it was so emotional that, at times, I found it hard to keep going. I adore Shane and Greg and wanted to do their story justice, and write it the best way I can.
I'm so excited for the world to finally meet those guys, and hopefully, fall in love with them too. They've been through so much, but it's worth it in the end, I promise ;) 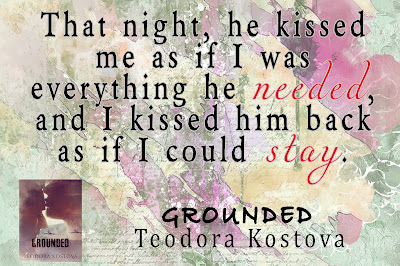 If I had to describe this book in 2 words they'll have to be angst and sex LOL. It's got a ton of both. And it also features the happiest, most over-the-top HEA I've ever written. 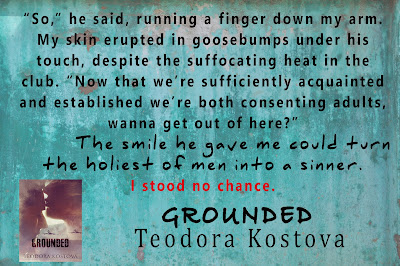 Sounds like something you'll enjoy? Here's the full book description:

A chance encounter.
A passionate night.
An intense connection.

When medical student Shane Sanford and RAF pilot Greg Becker meet the air between them sizzles with mutual attraction. There’s nothing holding them back as they give in to their desire. But once their paths lead them into a different direction, neither of them can forget the intense connection they’d shared.
When fate brings them together again a year later, they have a choice to make: try and make a long-distance relationship work or let this be a one-night stand again.
With war, tragedy and fear standing in their way, can Shane and Greg overcome the challenges life keeps throwing their way? Is their bond strong enough to survive?
Is love enough? 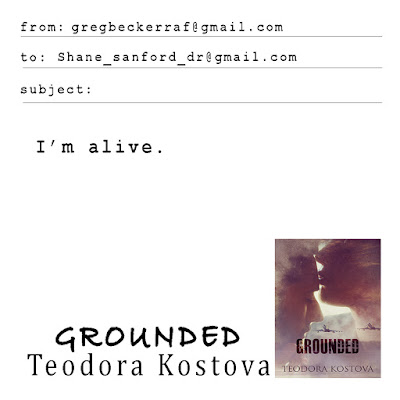