Vivaldi in the Dark - a YA trilogy everyone needs to read! 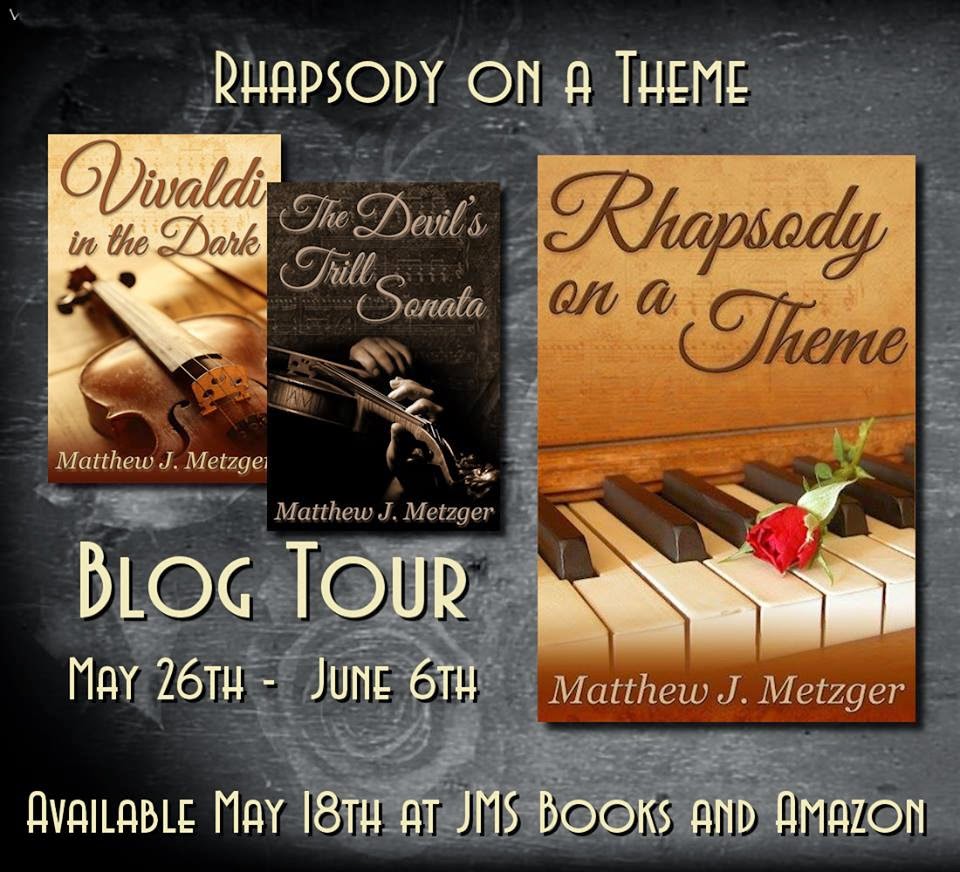 I recently read Vivaldi in the Dark - a YA LGBT novel by Matthew J Metzger, and fell in love with it. I raved about it to all my friends, stalked the author, bought the paperback to get it signed (turned out Matthew will be at the UK Meet as well and I'm actually going to meet him and fangirl all over him. Yay!!!), and inhaled the other 2 books of the series.
I reviewed all 3 books for Rainbow Gold Reviews - they let me play on their amazing book review blog from time to time.

Here's a little teaser from all 3 reviews:

Vivaldi in the Dark:

This book is important! This book should be in the school curriculum or, at the very least, in every school library. Every teenager should read it regardless of whether they’re gay, straight, in between or undecided. I can’t stress that enough. If there’re any parents reading this, please make sure your teenagers reads Vivaldi in the Dark. It might change their lives.
Vivaldi in the Dark is a YA LGBT novel set in a small English town. Sixteen year old Jayden is a shy kid who is bullied in school because everyone assumes he’s gay. They’re right – he’s not exactly hiding it, even if he hadn’t publicly come out yet. A single child to working class parents, Jayden counts the days until he can take a scholarship exam and hopefully get accepted to do his sixth form in St. John’s – a private school at the other side of town. His dream is to study in Cambridge and it would be much easier to achieve if he had St. John’s in his resume.
To read more, click HERE.
The Devil's Thrill Sonata:
The Devil’s Thrill Sonata was composed by Giuseppe Tartini after he woke up from a very vivid dream. He’d dreamt of the Devil, who was playing the violin and the music erupting from the strings was the most beautiful thing Tartini had ever heard. Unfortunately, as hard as he tried, the composer never managed to exactly replicate the music from his dream. The Devil’s Thrill Sonata became his masterpiece, his most famous and applauded composition. And yet, Tartini knew it was just an imitation of a wonderful dream.
This in a nutshell is what The Devil’s Thrill Sonata, the sequel to Vivaldi in the Dark, is all about – holding your dreams in your hands and watching them burn. Because no reality is ever as good as a dream, is it?
“He was firm under Jayden’s touch, hot to the finger tips and warm to the heels of his hands, and he was real. Darren wasn’t – hadn’t ever been – a dream.”
The Devil’s Thrill Sonata is set three years after Vivaldi in the Dark finished. Jayden is accepted in the University of Cambridge – his dream come true – and Darren is starting job training as a crime scene investigator in Southampton, away from his parents, away from the music he detested and… away from Jayden.
To read the rest of the review, click HERE.
Rhapsody on a Theme:
Rhapsody on a Theme is the third and final book in the Vivaldi in the Dark trilogy. It’s set 3 years after The Devil’s Thrill Sonata ended, and the boys are all grown-up now. Darren’s career as a crime scene investigator is taking off, and Jayden has found a job in the local newspaper after graduating from Bristol University. They live together, sharing the mortgage and the bills, and they’ve both out-grown the misconception that high-school love didn’t last.
“Suddenly ‘boyfriend’ didn’t seem enough to describe Darren anymore. Suddenly, the idea that he’d had in sixth form, that they’d split up in uni, seemed downright stupid. They weren’t going to go their separate ways. They weren’t going to split up. Darren… Darren was forever.”
Life is somewhat normal. At least on the outside.
Darren is still battling his depression. It has changed ever since he was a teenager, but it’s still there – an ever-present shadow in their otherwise perfect life.
Darren goes through several kinds of treatments over the years, and keeps trying to find the right way to deal with the depression in this book. His reaction to the medication he gets prescribed is gruesome. More heart felt like it was being squeezed with an iron band the whole time. I’ve grown so attached to both of those boys that it physically hurt to read what they both have to go through.
To read more, click HERE.
You can see how much I loved those books and how much they affected me. I truly believe everyone should read them, and once you do, they'll settle in your heart and your 'favourites' collection for good.
Trust me on this, go for it!
You can buy the books HERE.


Posted by Teodora Kostova at 08:19 No comments: