How my cover was created - step by step guide.

I decided to write a post about how my book cover came to life. As you can imagine, I'm very proud of the cover and love it to bits. It was hand-drawn by a very talented artist called Olga. She thought of the whole concept on her own but kept me in the loop with regular updates.
So this is the first picture she sent me for approval: 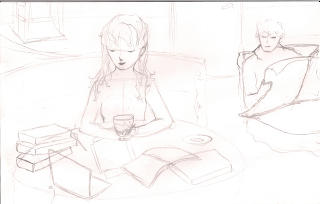 I didn't like the fact that the guy was sitting at the next table reading a newspaper - I don't know exactly why. Maybe because I had a similar scene in the book and the man reading the newspaper was not the main male character and I thought this may cause confusion. So she changed it: 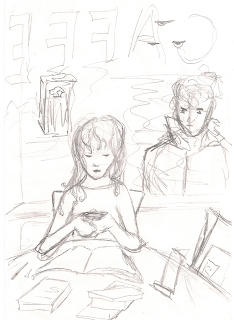 That was more like it. This time I didn't like the huge letters on the window and she had misspelled Cafe (she's German so she was forgiven). In a few weeks, long Christmas break, illness and a broken computer later, she sent me another picture to look at and she had added colours: 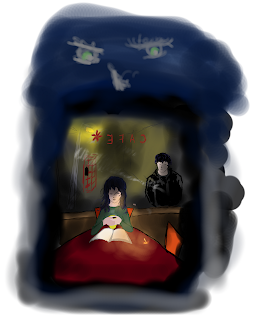 That was the point when I could really imagine the finished product. I loved it.
Next, she sent me another picture, almost fully finished: 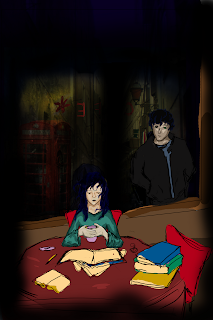 Olga had added all those details and I couldn't believe how talented she was. All that was left to add were the eyes at the top and the title: 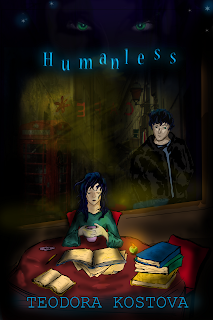 I didn't feel the blue was right for the cover, I definitely preferred green, so that it corresponded with the eye colour. (Fun fact - the eyes are really Olga's - she cut them out of a photo of herself and made them green)
So, in the end, she made all letters green and I fell in love with the finished product - it was exactly what I wanted! 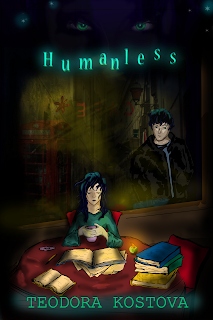 The cover creation may seem like an easy, straightforward process but it wasn't. It was stretched along 3 months, with many ups and downs. But at the end of the day, what matters is that it turned out amazingly well. And it feels very personal to me because it is my very first cover for my very first published novel, I was involved in it every step of the way and, let's face it, my cover artist has her eyes integrated as an irreplaceable part of my book. I wouldn't change a thing.
Posted by Teodora Kostova at 04:16 No comments:

I was ill for the best part of last week. It was so bad that I can’t remember most of it. I can’t even remember when was the last time I was so ill. I spent my days lying in bed, trying in vain to open my eyes or move or focus for a minute. It’s all a big blur. And for some reason it’s blue. The blur I mean. When I look back now that I’m feeling better, I see the blur as being blue in colour. I always associate things with colours – places I’ve been, people I’ve met, books I’ve read, films I’ve seen. I forget very easily; most of the time I don’t remember film or book endings or directions or people’s names. But I remember colours and I remember how they made me feel.
I guess it’s true then, that you may forget what somebody said or did but you’ll never forget how they made you feel. For me, it’s the greatest truth in the world. It defines my life.
Anyway, getting a bit off topic. My point is that I felt so ill, so weak and helpless for so long, that I forgot what the world outside my house looked like. Or what it felt like to drive a car – when I drove for the first time after the illness, it felt somehow surreal and unnatural, like I was gliding instead of driving. I also forgot what time and day it was, and even worse – what time and day Glee was on. But what’s most shocking is that I forgot how to write.
I sat in front of the empty Word document, stared at it for half an hour, then turned off the laptop. What was wrong with me? Sick for a week and I forgot how to write a single sentence. Not good.
I read a lot though. And the more I read, the more convinced I became that everything else written by somebody else was much better that anything I have ever written. And it’s not like I have just now started reading and realized it. I have always been a big reader, and although those thoughts were creeping up in my head from time to time, I always managed to get rid of them. Now, however, they seemed like they were here to stay.
I got really depressed for a few days. I didn’t know if it was because of my illness, or because I hadn’t fully recovered yet and needed to give myself a break and relax a little until I felt fully myself again.
I’m pretty much back to normal now. I can’t believe how tough a simple flu was to get over – mentally, physically and emotionally. So, take a piece of advice from somebody who’s been there already – if you see someone sneeze, cough or blow their nose in any close proximity – run! As fast as you can. And after you’ve put a considerable amount of distance between you and them, disinfect your whole body, drink all the vitamins you can find and pray for the best. And arm yourself with Dettol spray for the next sneezing flu trap you encounter.
Posted by Teodora Kostova at 06:20 No comments:

Last time I posted an attempt at screenplay writing for a short film. Today, I present to you, my dip in the deep waters of theater plays. "The Break In" is a ten-minute play I wrote last year, on a pure whim.

Not long ago I wrote a screenplay for a short film competition. It was the hardest thing I have ever done. It's very difficult for me to write short stories, short screenplays, short anything. I love developing characters, scenes and the whole story over a course of a novel or a full length film. But grabbing people's attention and creating beginning, conflict, resolution and end in a five-minute screenplay is not easy.
I definitely won't be doing that for a living, but I believe you should try anything, otherwise how do you know it's not for you or the vise versa? So, here it is. Hope you enjoy it.