I promised you a big teaser and here it is - the full first chapter of Unfree! It picks up right where Humanless left off. Enjoy!

Jason had never seen Zeus look so stunned, so genuinely surprised and shocked before. He didn’t even move during Ava’s outburst, not even when she ran out and Blake followed her, none of them asking for permission to leave. It took him several minutes to compose himself after they had left and, Jason suspected, decide how to react. He could easily send the guards after them, but Jason doubted he would.
“That was interesting,” he finally said, a smile playing on his lips. “Is she always like this?”
“Pretty much,” said Jason, still unsure of what would happen next.
“Asclepius, I want you to know that you are safe here. You can stay as long as you want,” said Zeus and that was the last thing Jason expected to hear.
“Why?”
“Well, this is your home, isn’t it?” said Zeus, but when Jason didn’t seem convinced he continued: “I’m eternally grateful to you for saving Ava. It put me in a terrible position with Hades, as you can imagine, but I managed to handle him. If you hadn’t done that, I’d have never known about any of this, I’d never have been able to fulfill my Fate.”
“But can’t you see? Your Fate has changed. It’s not the same as it was centuries ago. Ava wasn’t meant for you. She loves your son.”
“Yes, she does,” said Zeus, his brown eyes catching the flame from the candles and trapping it there. “For now.”
Jason shook his head disapprovingly but didn’t say anything under his King’s scrutinizing gaze. “Oh, and by the way, to prevent any trouble in the future, can I have Athena’s kérma back? I don’t want to deal with my obnoxious brother again if you decide to be the hero of the day and bring any more souls back.” Zeus extended his hand waiting for Jason to place the priceless coin in it. The healer hesitated for two seconds too many.
“Asclepius, don’t test my patience. It’s wearing thin this evening already. Give it back now or I’ll tell Ava how you chose to send her beloved cousin and only true friend to the Underworld so that Ava can have the happily ever after she deserves.” Zeus never raised his voice but his eyes radiated so much menace that Jason remembered why he’s been the King of all Gods for so long without anybody challenging him and placed the kérma in his hand.
The inscription προφύλαξη ψυχή – “soul saver” – shone brightly in contact with Zeus’ palm, recognizing the King’s power and surrendering to it.
Jason was soul saver no more.

“Ava!” Blake shouted when he saw her collapsing on the floor. He sat next to her and enveloped her in his arms while she sobbed. Feeling her body shake made him so angry. She didn’t deserve any of this. Everything she said in there was right – she was an innocent human girl, caught in the cross-fire between self-obsessed, cruel, selfish gods. And now she was being held against her will in a foreign world, still just a piece in a puzzle.
Zeus didn’t have any intention of ever letting them go, at least not Ava. Blake had never seen him so careful with his words, so calculating, so indifferent to insult. There was a plan brewing somewhere, a very clever plan, and Zeus liked his plans to go without a glitch.
“The King has sent me to show you to your bedroom,” said a guard, appearing out of nowhere. “Please, follow me.” Without waiting for Blake’s answer, the guard turned on his heels and walked away from them. For a second, Blake thought of refusing the bedroom, of taking Ava away from the palace, but he knew it wouldn’t be so easy. Zeus wanted her here and he, a mere mortal, could do nothing about it. They both desperately needed some rest so he decided to playing along with Zeus’ plan while taking advantage of staying in the palace and keeping a close eye on his father. Keep your enemies close, right?
What worried him most was that Zeus was probably using the same strategy. He was keeping them, or rather him, here to be under his control. He obviously knew about the choice he had made by saving only Ava, so why hadn’t he used that to break them up the moment they arrived? It was surely the easiest option. Blake hated being part of their games yet again so he made a mental note to confront his father and make him come clean.
The guard was almost out of view. Blake turned his attention back to Ava and seeing that her sobs had subsided a little, he scooped her up in his arms and took her to their bedroom.
Posted by Teodora Kostova at 04:02 No comments:

I'm so excited to be able to show you this photo at last! 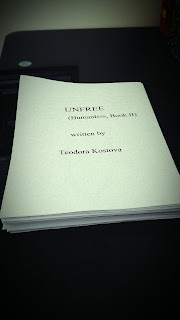 Yep, this is the finished manuscript for Unfree - the sequel to Humanless. I'm shipping it off to the editors next week and hopefully it will be published on Amazon very soon!
Writing a sequel has been a completely different experience than writing the first book. With Humanless I was free to procrastinate as much as I wanted and didn't have any expectations to match. With Unfree I knew I had to write a better book and develop the story further on so many levels. I didn't have any readers when I published Humanless because it was my first full-length novel but now there are so many lovely people who liked it and who have been so incredible and supportive. I owe it to them to write a good book and continue the story. All that put pressure on me and I was putting off writing it, finding an excuse after excuse for the 'lack of time'. But then, just like in the movies, I woke up one lovely, sunny morning (which is a miracle on its own since I live in London) and thought: 'Enough is enough! I need to finish this book because otherwise my head is going to burst'. The story was there, I just needed to get a grip, sit on my butt and write it.
So I did. I wrote for hours on end each day, completely ignoring my family, my friends, TV, etc. I booked an editor and a cover artist so that I knew there was no way out of this - this book was getting written if it killed me. I even invented a reward system - if I wrote 5000 words today, I'd watch 2 'White Collar' episodes tonight. And it worked. The above photo is the proof.
Finishing Unfree felt so exhilarating! I'm walking around with a huge grin on my face and feel so good! It was hard starting over - going from a finished, edited and polished manuscript back to staring at the blank Word document. But I pulled through and overcame the 'second book blues'.
To everyone who emailed me or sent me a message via Twitter of Facebook, etc - THANK YOU! You gave me the push and support I needed and if it weren't for you (and Neal Caffrey) I wouldn't be holding a finished manuscript in my hands right now.
I can safely say that it would get easier from now on. I know I can't wait to sit down and write the final book and I also have 2 more ideas pending - one of which is for contemporary romance. I absolutely love writing, despite all hardships, and if I had any doubts that I'll be able to do this as a full time job for the rest of my life, I have none now.
Hopefully next week the cover will be ready because I know it's going to be great and I can't wait to show it to you!
Posted by Teodora Kostova at 05:06 No comments: