Book of the week - The God of Jazz: Fugue, Concord by Varian Krylov 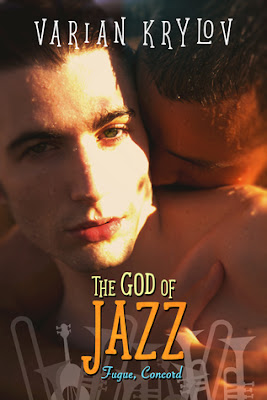 After years struggling to realize his dream of directing a feature film, on the final night of his fundraising campaign Godard is on the cusp of having everything he ever wanted. The man he loves is upstairs waiting for him, and he's just a few dollars short of his GoFundYourself goal.Then everything falls apart.His personal and professional life in ruins, when his old nemesis from film school offers to fund his dream project if he's willing to shoot it in Spain, Godard knows it's a deal with the devil. But he also has nothing left to lose.Among the labyrinthine streets of Barcelona's Barrio Góthico, the city's vibrant music scene, and the sun-gilt beaches of the Costa Brava, Godard begins shooting his dream project and putting his life back together, largely under the domineering gaze and deft touch of Ángel, the god of jazz.But Ángel is keeping a secret, and a deal with the devil always comes at a price.

I absolutely loved this book!
It's no secret that I've loved every single of Varian's books, but this one must be my favourite.
The God of Jazz: Fugue, Concord is a much lighter read than Varian's other books - it doesn't have the angst of Dangerously Happy or the heavy BDSM theme of Bad Things or the intensity of Transmudo. But it's got a certain magic to it that makes it absolutely brilliant, and so so beautiful.
I don't want to give away too much from the plot because I'm a firm believer that all books should be experienced without knowing much about them, but the premise of the story is this:
When Godard's long-term relationship falls apart, and his dreams of making the film he's written ages ago and keeps believing in follow in the dust, he agrees to a deal offered by an old friend, and goes to Barcelona to film his movie.
I love it when the setting of the story becomes a main character. Barcelona is one of the MCs in this book, and it's described so vividly, so beautifully that the whole time I was reading I could actually imagine myself there, in the streets of this amazing city, or cooling off in the sea after a run on the beach.
Godard and Ángel's story is sexy, intense and real. I loved these two together. They made me swoon so many times I lost count.
I also loved the movie Godard was making. It was so emotional and described so well - I'm not gonna lie, I did tear up once or twice.
Varian's writing is as beautiful as ever. She's one of these writers who transports you straight to the heart of their story, and can make your heart beat faster with a few simple words.
Can't recommend this book enough! It's a delight to read!

Here's a little excerpt to whet your appetite:

“Want a beer? Or, I have a bottle of Penedés.” I locked the front door, surprised to realize my hand was a tad jittery. But to be fair, in the years between losing my virginity with Jordi, and falling for Michael, I'd only been with three other men. One one-night stand, and a bit of casual dating. After five years of living like a married man, bringing a sexy stranger home and knowing we were about to fuck, was a new thing.
And this guy. Ángel wasn't just gorgeous. He had the most intense, commanding presence of anyone I'd ever met. And there he was, just looking at me, not saying a word. The sun was settling down against the horizon, its rose and gold rays flooding the living room and setting Ángel's whiskey irises aglow.
“Take off your clothes.” The quiet command uttered in a sultry tone had a firmness yielding no hint of doubt I'd do it.
Damn.
A twinge hit my heart, then heat swept through me, singeing my skin and settling in my groin. The warm arousal that had me buzzing, my junk feeling heavy and making my shorts increasingly tight as we'd walked to my place now swelled to a demanding, pulsing pressure. His expectant gaze slid over me like a touch, settling on my crotch, making me breathe harder. Already stiff, my dick jutted out against my shorts.
I was up for it. A hundred percent. But I wasn't much for taking orders. Especially since Ángel's mere presence had a way of making me feel like an adulating acolyte.
“Ángel?”
“Hmmm?” No hint of surprise I'd remembered his name from the jazz show. “Don't you want to know my name?” He smiled. “Do you want me to know your name?” Well played. I grinned back, grasped the hem of my T-shirt and took it off, sliding it up slowly, teasing him as I bared my navel, my abs, my nipples inch by inch. Sure, he'd seen me shirtless—hell, even naked, apparently—on the beach. But we all enjoy a little anticipation when watching the guy we're about to fuck undress. Unabashedly staring, one forearm crossed under his chest, Ángel brought a hand against his chin and ran the pad of his thumb across his bottom lip, as if he were picturing the feel of my skin against his mouth.

Growing up near Los Angeles, I spent much of my time frolicking in the Pacific and penning angst-twisted poetry. Now I'm living in sunny Spain writing pathos-riddled fiction. Ironically, two of my favorite things are traveling, and swimming in the ocean, despite increasingly intense phobias of sharks and flying.
I've always loved the music and substance of words, always loved writing in well-worn notebooks by hand, tapping at the keys of the computer, and, of course, conjuring up stories.
When I'm not writing, I'm probably messing around with my camera, either having fun making cover images with the sexy models of Barcelona, or just wandering the streets, snapping the wildly varied architecture and amusing humans. Or I might be riding my bike, swimming in the sea (no sharks in Barcelona!), going on a hike somewhere in the local mountain ranges, or working on my PhD thesis.


Posted by Teodora Kostova at 04:10 No comments:

A Sip of Rio is LIVE on Amazon

My new book, A Sip of Rio, is LIVE on Amazon and available on Kindle Unlimited.

A Sip of Rio is the perfect read to transport you back to the hot summer days of long walks on the beach, endless sunshine and cocktails at lunch time!

Description:
~Liam Young has a problem – he’s booked a romantic holiday to Rio de Janeiro months ago, but when he breaks up with his boyfriend, all his plans fall apart. Not only is his dream holiday slipping through his fingers, but Liam is sick and tired of getting his heart broken.
Blaine Reed has a solution that can save Liam’s plans. Recently divorced, Blaine needs a break, and a couple of stress-free weeks in Rio with a sexy guy like Liam sound like heaven.
Liam and Blaine hit it off right from the start, becoming good friends even before they’ve left London. Despite their efforts to ignore the simmering attraction between them, it boils over when they end up sharing a room in one of the most romantic cities in the world.
Being together in Rio is easy, and it’s exactly what Liam needs – no feelings, no drama, nobody getting hurt.
Until someone does.
When the holiday bubble bursts, it’s up to them to find a way to be together outside of Rio’s seductive magic.~ 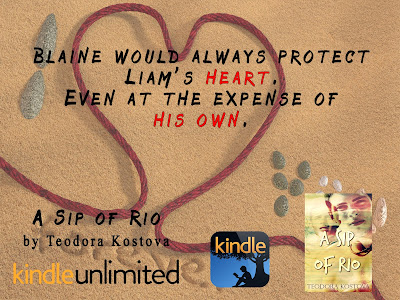 Posted by Teodora Kostova at 11:21 No comments: